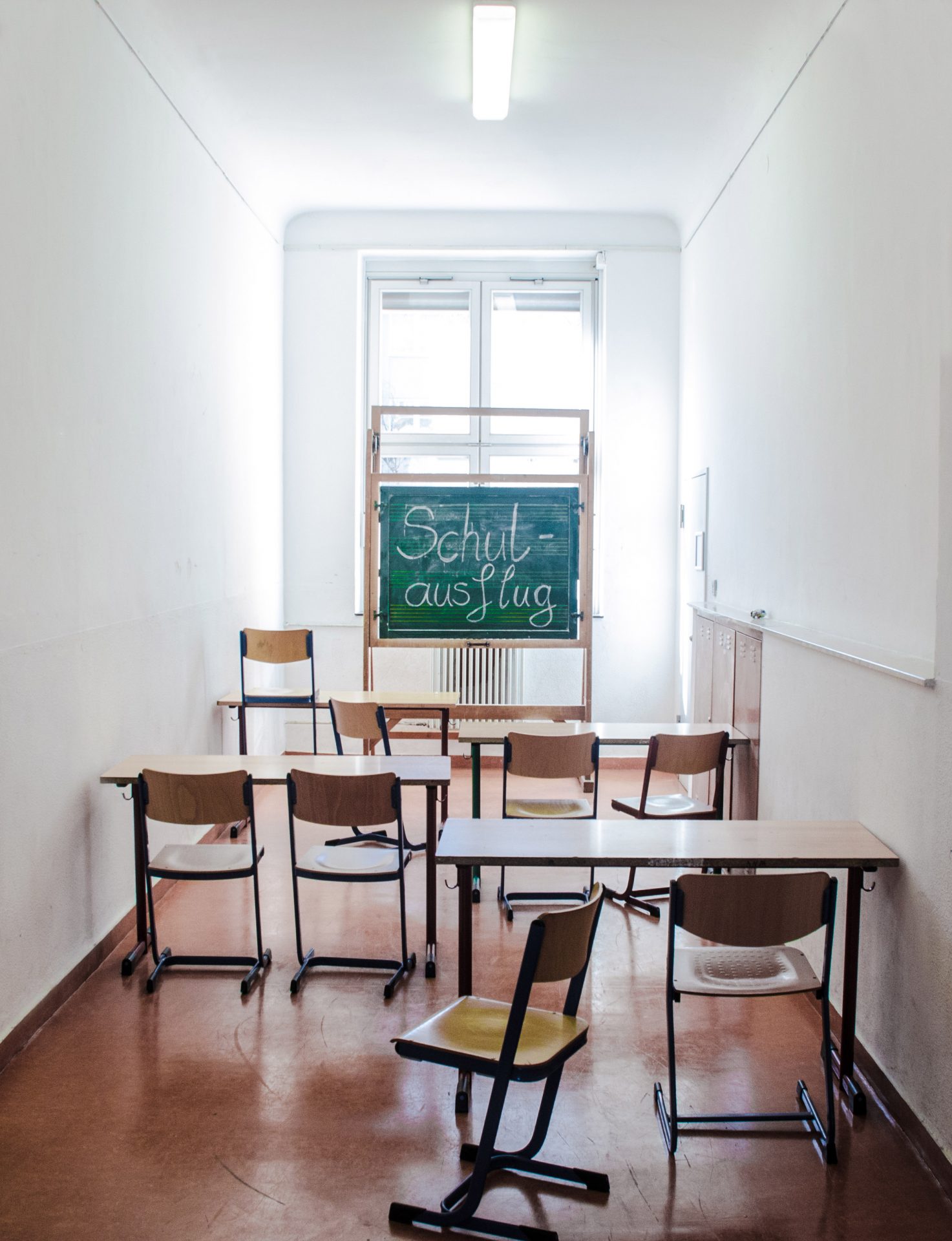 Between math notebooks and ink stains, chalk dust and overhead projectors, pencil sharpeners and water colours, everyone sits well-behaved and quietly in the classroom and studies. Really everyone? No way! Today it’s time for a class outing! We pack away our notebooks and take our mates by the hand. Raise the curtain! The field trip conveys us to undiscovered areas of the educational system. In the whirl of disciplinary strategies and lunch boxes, the audio walk and classroom play morph into an adventurous excursion into the unknown domains of a Berlin school.

With the video stream of this production, we will go on a school excursion and perhaps even stop by in a Berlin classroom. To really get into the groove, we recommend that you prepare a couple of sandwiches – which you could perhaps swop with the person sitting next to you on the couch?

The performance group Hain/Kapsner/Mahlow/Romanowski was formed at the Mousonturm Frankfurt. The four artists connected because they all had the same question: How can we make challenging political theatre for children and young people? Theatre that takes its audiences and actors and actresses seriously and yet remains empathetic. The resulting works should not just be considered for young people, but for everyone.

Please note the following content warnings:
- At one point, there is a representation of a ghost.

Everyone Should See This

“The monster is in the centre of town, it dug itself into the ground between the streets and the backyards. Only its head is sticking out, with small eyes wide open that miss nothing and nobody. Under its right eye there is a scar from a fight with a streetcar. Fyi: the monster won”.

I listen to this text over headphones while entering the Herder School in Frankfurt am Main with a bunch of kids, I guess about 8 or 10 or 12. The entrance looks like the mouth of a monster and I think: Spot on. That’s the way it is, the way I experienced it for 13 years. Even though I attended another school. Those 8, 10 or 12 year-olds and I form one of several groups. We wear hats of the same colour. Just like our tour guide, one of the four performers telling us where to go, on this audio walk titled “school excursion” which I realise is today’s programme. I used to have a tummy ache when the monster swallowed me in the morning, and now I have butterflies in my stomach. What will happen to me? Where is this leading us? This is school in the school. Won’t we be disruptive? But in fact, we are not, when we enter a sixth form English class and hang out, still equipped with headphones. They pretend we are not there. And I think: this is great. School is in effect a theatre! I had seldom seen it as clearly as in that moment watching pupils and teachers playing themselves and even I disappeared in this scene that would not have happened without me there. How do the others I am with see this? Those who left school this morning to go to the theatre only to end up back in school? Experiencing something apparently so familiar in this completely different way, this is what theatre can do. Everyone should see this, I think.

Thank you for the support to TheaterGrueneSosse

In collaboration with IGS Herder. A Mousonturm Co-Production. Funded by the Ministry of Science and Art Hessia as part of the intergenerational mediation initiative: "ALL IN - FÜR PUBLIKUM JEDEN ALTERS" (“ALL IN – FOR AUDIENCES OF ALL AGES”), the Kulturamt Frankfurt and the Fonds Darstellende Künste. Conceptual research within the next generation workspace – a residency production of the Künstlerhaus Mousonturm, Starke-Stücke-Festival, Theaterhaus Frankfurt and the Theaterakademie Hessia.