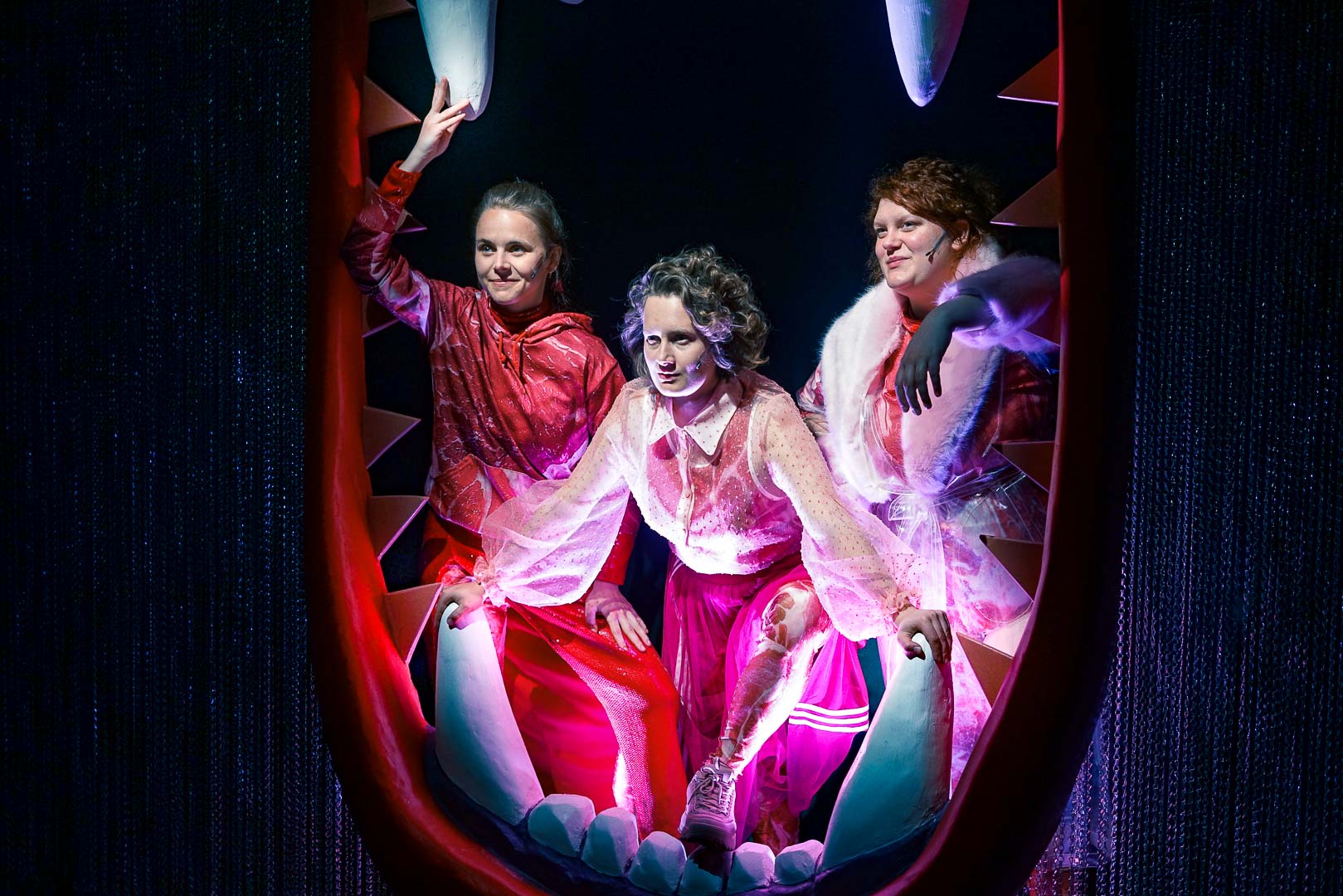 Men eat steaks. They drink beer. They burp. They are constantly really hungry. Their energy consumption is higher. Women eat colourful salads. They only want a small piece of cake. They are into low carb. They always say they’ve had enough to eat. They starve themselves. This just shows: Lots of Sexism in our Schnitzel! Henrike Iglesias say: Bullshit! We are hungry and we will stuff ourselves! In their cookery show, performers will serve up our society’s obsession with food and will devour whatever gets in their way.

We all lust for social interaction, so ‘gobble’ will take place as a digital and interactive live performance at your kitchen table! Get some snacks and immerse yourself.

Henrike Iglesias understand pop cultural and mass media phenomenons as a mirror of societal conditions and grievances. They have made it their goal to illustrate these from an explicitly feminist perspective. A theatre collective based in Berlin and Basel, the main crew consisting of Anna Fries, Laura Naumann, Marielle Schavan and Sophia Schroth, as well as Eva G. Alonso and Malu Peeters. They like to perform as Feminist Killjoys, DJ Henrike Iglesias and as internet users.

Please note the following content warnings:
- We will debate on bodyshaming, eating disorders / eating compulsions.
- Loud music, stroboscopic effects and movable searchlight headlights will be used in some places.
- There is complete darkness in some individual scenes.

on the analog version of
FRESSEN
by Annalena Küspert

„I am Hungry Again“

Curating during Corona. I am sitting at the table in the kitchen when I start the video of “Fressen''. Coincidence or not, I am – surprise – seated in the right setting. There is also a kitchen on stage which, I will have to admit - looks different from mine. Which isn’t surprising. But what takes place also concerns me. Me and my body.  And the body of my mother and my grandma und my sister, the bodies of my nieces and my daughter. She is only three and experienced her first body shaming at the age of 16 months when I picked her up from the nursery, when a father of another child could not keep his “she’s quite chubby for a girl” to himself. I see my rage, my shame, my dismay – regarding the way a grown-up man views the body of a toddler he reads as female - on stage on my laptop on that Corona summer afternoon. Gobbling women. Pickles, spaghetti, pizza, crisps, canned whipped cream - and that’s not all. Will this work out? How hungry may a female body be before society dismisses it? And then? I see three young women discussing their hunger, their desire, the internalised dos and don’ts and the images of supposed perfection. I see pain, rage and revolt. F* you, male gaze. I look and feel looked at. As a woman and as the girl I once was. Very liberating: in this theatre nobody falls into the trap of having to prove anything to anybody. “Fressen'' is not a cleverly or well researched documentary; it convinces with an extremely relaxed, wilful and anarchistic dramatization. How many diets could I have avoided if I had seen such a performance back in the 90s? I do not know, but I know: I am no longer interested in looking a certain way to achieve happiness. And I absolutely do not want my daughter to believe this either.