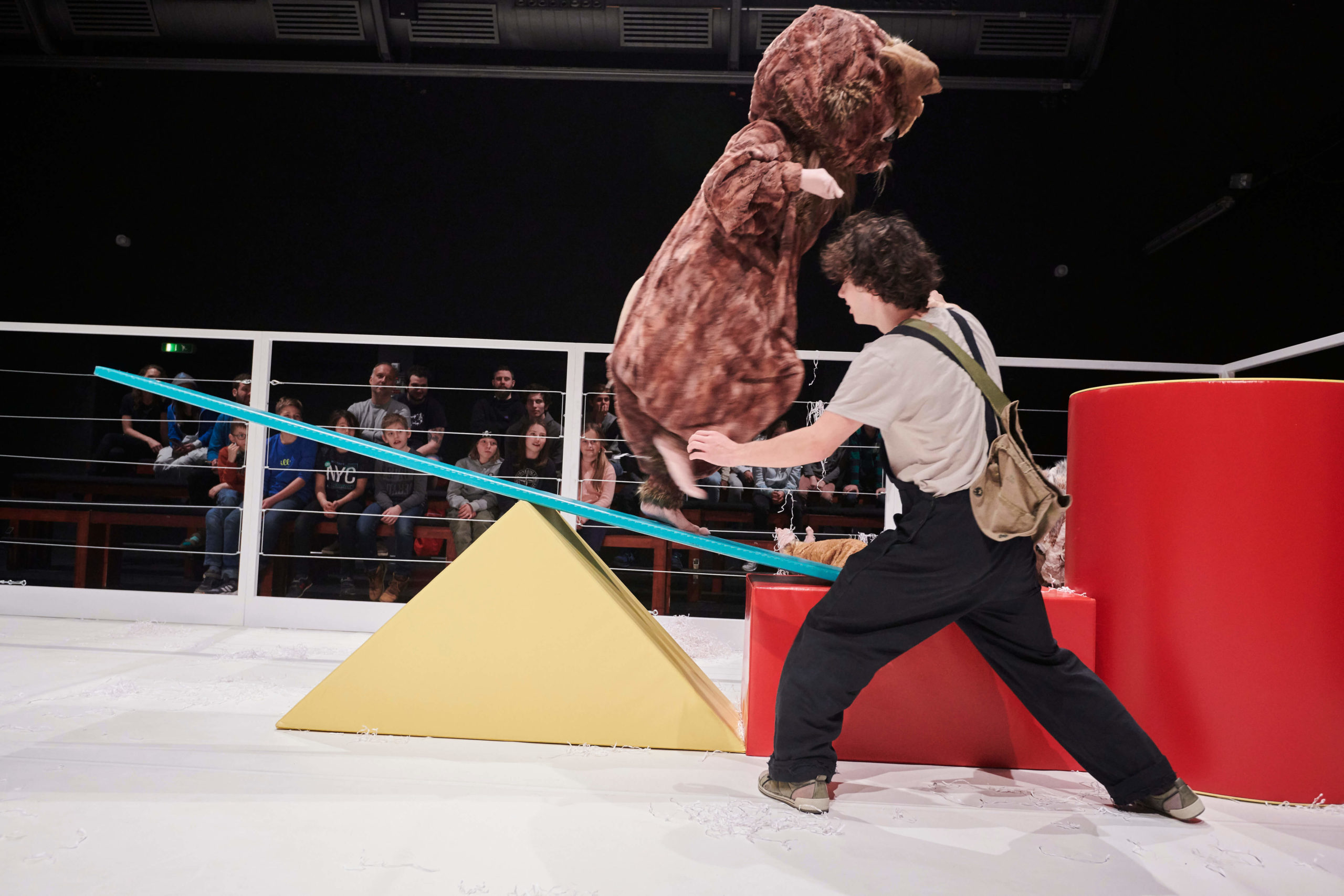 Aren’t hamsters cute? We can feed them, pet them and cheer them on to learn some tricks. There is a huge cage in the middle of the theatre. It contains three plushy hamsters who perform some great tricks. But what about the stern voice coming from backstage? Who can keep track of what’s going on and who is responsible? With this production, the company invites its audience to a play about power and responsibility.

This production feeds on the interaction with the audience. Hence, there will be several live performances in which you can participate or, should you prefer, just watch. English subtitles will be provided.

Ariel Doron is a puppeteer from Israel. He studied film at the university of Tel Aviv. He directs, acts and performs worldwide, also in film and TV, including the role of ‘Elmo’ in the Israeli Sesame Street. With a great deal of playfulness, he highlights social and political issues in his work. He currently lives and works in Germany and cooperates with theatres such as Schauburg in Munich, Theater Junge Generation Dresden or Maxim Gorki Theater Berlin.

After the play there will be a talk on April 16, which will be interpreted in DGS. On April 17th, instead of the talk at 3 p.m. you can join a workshop with the Blick's Mal Kids.

For this piece we give you the following content warnings:
- Cruelty to animals, responsibility and questions of power are the subjects discussed here.

Three human-sized hamsters in a giant cage play with wood wool and gigantic building blocks. A keeper encourages them to show tricks, seems to feed them and introduces them to the audience. Everything is beautiful, loving, funny. Even in those first minutes of the play, I start feeling uncomfortable. What are those animals doing? Why are they in that cage? Why am I watching them? Who is that keeper and what does he want with those hamsters?

And yes: the hamsters are taken somewhere, one after the other, the keeper is requested to do so through loudspeakers. The animals are obviously afraid, they won’t return. The noose is tightening. The keeper is overpowered by the hamsters, after his rescue he rebels against the voice from backstage, tries to free the hamsters, then the doctor in charge enters the stage, she reproaches the keeper severely.

Director Ariel Doron and the company of the Schauburg Theatre have created a complex performance, which explores the mechanisms of power and manipulation and steps on the audience’s toes with the question of having a moral obligation for one’s own behaviour. Over and over again they create situations which offer the audience the opportunity to interfere. The limits of truth, half-truths and supposed truths blur constantly. How do I justify my value system? Which information, which perceptions can I rely on?

The audience is the actual object of the experiment. Consequently and mercilessly, the young people are thrown back onto themselves and the limits between a challenge and an overload of challenges are radically explored. Presented with great theatrical and artistic talent, this is a relevant, courageous invitation to children and adults to discuss those issues.